Following the first version of the electric train : http://djynet.net/?p=731

After some weeks of works I’m proud to announce the Version 2 of the electric train: 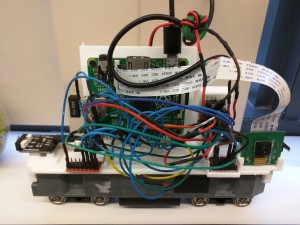 The train can now be control with Wifi. It creates a wifi hotspot at boot time allowing people to connect to access a UI with some commands. The Wifi hotspot creation is describe HERE

The train now offers a Web UI which allows controlling it and seeing the camera broadcast. The UI is done in Angular JS (with Bootsrap Angular UI). The Web server used to render the page is a python one : Tornado.

In addition of the UI it offers REST API to control the train (which are called today by the UI but could be used for a native Android application). The Web creation setup is detail HERE (TODO).

The train is now equipped with a camera (the official Raspberry camera). The camera stream is broadcast and available on the train Web UI. The camera broadcast setup is describe HERE

I replace the Arduino board with a Raspberry Pi A+. This extra boost of power was needed to broadcast the camera stream and create a wifi hotspot.

The biggest surprise I had when creating the new version was lot of unexpected Raspberry Pi reboot. Every time I was starting to move the train the Raspberry Pi was rebooting. I quickly suspect it was due to the motor which either took too much current or create perturbation that the 7805 cannot handle by itself. I done some research to understand how this issue was usually handle in R/C world and find out that they already have the perfect solution : BEC.

It is used to power the command part of the RC model from the same source than the motor. It provides a smooth tension and is able to absorb the impact of the motors on the power source with use of self and capacitor (wikipedia link). Since it is standard component in R/C world you can buy them pretty easily on the Web :

The final result is visible in this video : TODO